Miss Wilson has performed with Nat King Cole, Billy Eckstein, Cannonball Adderley, Louis Jordan, LaVerne Baker, Dinah Washington, Ella Fitzgerald, Sarah Vaughan and Ruth Brown. With 60 albums in her discography, over 30 of which made the Billboard charts, Miss Wilson is an acclaimed entertainer and jazz vocalist of the highest order.

Her exciting live performances and her many television appearances have earned her a reputation as one of the stellar performers in jazz.

She has many hit records such as “Tell Me The Truth,” “How Glad I Am,” “Peace Of Mind,” “Now, I’m A Woman” and her signature song, “Guess Who I Saw Today.” She had her own Emmy Award-winning NBC-TV series, “The Nancy Wilson Show.” She also appeared on other variety shows including the “Flip Wilson Show,” “The Carol Burnett Show,” and the Andy Williams Show.” In addition, she has appeared on other major television shows such as “The Tonight Show,” “The Lou Rawls’ Parade of Stars,” and the “Arsenio Hall Show.” Wilson also had recurring roles on “The Cosby Show” and the Fox sitcom “Sinbad.”

A highlight of the show for the Austin audience came when Miss Wilson invited Pamela Hart to the stage for an impromptu duet. 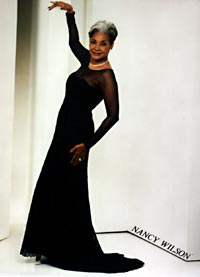