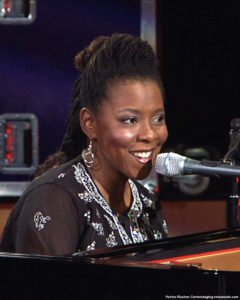 Patrice Rushen was featured in the Women in Jazz Concert Series on June  2, 2007 at the Paramount Theatre, Austin, Texas, with Terri Lyne Carrington.

Multi-Grammy nominated artist, Patrice Rushen, fashioned her career after the legacy of her long-time friend and mentor, Quincy Jones. Composer…Producer…International Recording Artist…Rushen has definitely earned the respect she has been awarded by her peers in the music industry.A classically trained pianist, Rushen has spent a lifetime honing the skills that make her one of the music industry’s most versatile and sought after artists. In 1998, she was again honored by the music industry when her adult contemporary CD, “SIGNATURE”, received a Grammy nomination. The CD also received an NAACP Image Award nomination and also landed in the top ten of the adult contemporary jazz charts. The critically lauded, chart topping style she championed in the 70’s and 80’s — a jazz/R&B/pop fusion that combines melodic accessibility with instrumental prowess. This not only became her signature style, but also has continued to be a mainstay of popular radio.

Rushen received some 30 requests weekly to use her music for samples, especially for rap albums. A few of the artists that have requested her music include Mary J. Blige, Zhane, George Michael, R. Kelly, Shabba Ranks and Heavy D. Many more performers have scored their own hits using samples from Patrice’s songs. Most notably is the smash hit “Men in Black”, which Will Smith recorded for the movie of the same name. The song was sampled from Patrice’s 1982 Grammy nominated recording, “Forget Me Nots”.

ASCAP honored Patrice’s publishing company for “Men in Black” in the category of most Performed Song from a Motion Picture for the year 1997. George Michael also had a dance-hit version of “Forget Me Nots” with “Fast Love”, which also sampled the song and featured Patrice’s original vocal tracks.

As a producer, Rushen helmed Sheena Easton’s “The Nearness of You” for the hit film INDECENT PROPOSAL, which led to an album of jazz standards, No Strings, in 1993, which Rushen also produced and MCA released.

Rushen has performed with Philharmonic Orchestras and has even written an award-winning symphony. She has served as Composer in Residence with the Detroit Symphony Orchestra for the 2000-2001 concert season. She has composed several symphonic works since 2000, each a commissioned assignment by a major orchestra and the World Premiere of each one of the symphonic works has been performed to rave reviews.

She has 14 solo albums to her credit and a greatest hits anthology released on Rhino Records in 1997. She has recorded two albums with The Meeting, the world renowned jazz super-group which includes Rushen, Ndugu Chancler and Ernie Watts. Currently, her career focus is composing for films, television and orchestras. She still enjoys performing and is often asked to make guest appearances at music festivals and on the recording projects of other artists. Rushen was the host of Clint Eastwood’s Malpaso Productions, “40 Years of the Monterey Jazz Festival,” which has been released on DVD. She was also featured on HGTV’s “Houses of Note” special.

In 2006, she was honored by Jazz At Lincoln Center at “The 2nd Annual Diet Coke Women In Jazz Festival” held at Dizzy’s Club Coca-Cola in New York, for her contribution to music. Rushen spends whatever free time she has working closely with the Los Angeles Cultural Affairs Department, NARAS “Grammy In The Schools” program and other organizations dedicated to establishing music education and mentorship programs for inner-city youth.