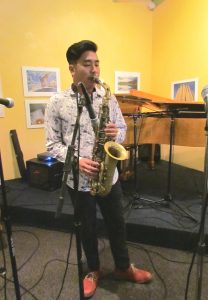 AYUMA is a producer and multi-instrumentalist, including saxophone Composer and teacher. A son and a brother. A human musician of all trades. Outside of music, AYUMA is… well not AYUMA. Music is the life force which drives him. It feeds his mind, soul, and wallet. Without music, he would probably have no food, water, and/or shelter… AYUMA is the new up and coming artist and has been called “The Future of Austin’s music.” He will live up to those words.