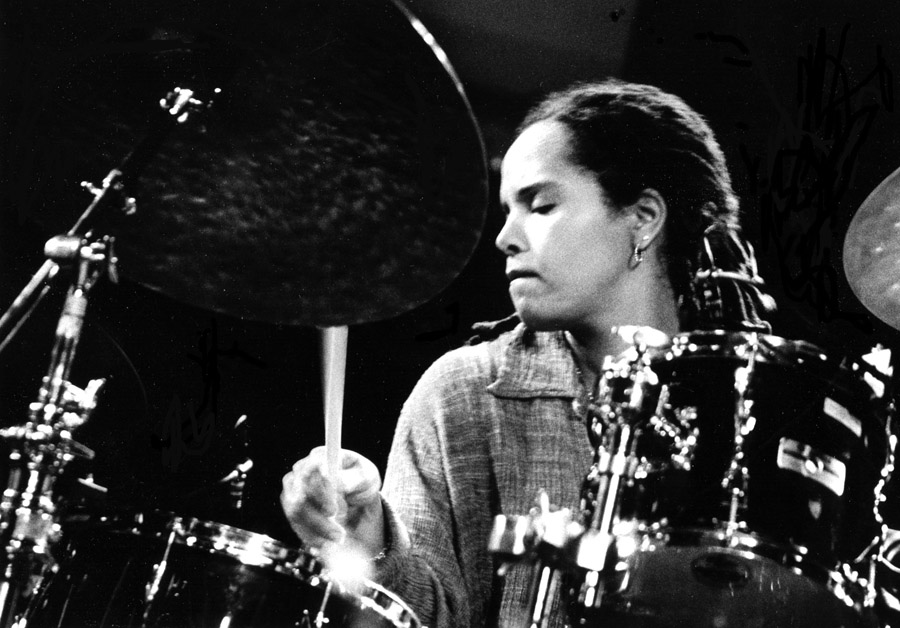 World-renowned drummer, composer, producer and clinician, Terri Lyne Carrington, has maintained her status in the industry as a person to watch for over 20 years. Born in Medford, Massachusetts in 1965, Terri developed a reputation as a child prodigy, jamming with jazz veterans Dizzy Gillespie, Rahsaan Roland Kirk, Oscar Peterson, Joe Williams, and many more. At 7, she was given her first set of drums, which had belonged to her grandfather, Matt Carrington, who had played with Fats Waller and Chu Berry. After studying privately for three years, she played her first major performance at the Wichita Jazz Festival with Clark Terry. Shortly afterward she received a full scholarship at age 11 to Berklee College of Music where she started playing with such people as Kevin Eubanks, Mike Stern, Greg Osby and others. She also studied under master drum instructor Alan Dawson and made a private recording entitled, TLC and Friends, with Kenny Barron, Buster Williams, George Coleman and her dad, Sonny Carrington, before turning 17. Throughout high school Terri traveled across the country doing clinics at schools and colleges and in 1983, encouraged by her mentor, Jack DeJohnette, moved to New York and started working with Stan Getz, James Moody, Lester Bowie, Pharoah Sanders, Cassandra Wilson, and David Sanborn.

Recently, she has concentrated her efforts on writing and producing with various artists including Gino Vannelli, Dianne Reeves, Siedah Garrett, Marilyn Scott and Danish pop singers Stig Rossen and Monique. Her production of Dianne Reeves’ Grammy-nominated CD, That Day, hovered at the top of the charts for many months. Terri was also the drummer on the late night TV show, “VIBE”, hosted by Sinbad. In 1998, she recorded along with Joni Mitchell and Stevie Wonder, Herbie Hancock’s CD, Gershwin’s World and is currently touring with both his electric and acoustic bands. Her latest solo CD, Jazz Is A Spirit, (released in March 2002 on the ACT Music label) has enjoyed considerable media attention and critical acclaim in the European and Japanese markets. Terri Lyne endorses Yamaha Drums, Zildjian Cymbals & Sticks, and Remo Drum Heads.