Grammy Award winner Norman Brown is on close intimate terms with his audience.  For almost two decades, it has been an engaging, mutually rewarding relationship with the multi-talented guitarist, composer and singer offering tasty sonic tidbits of classic R&B and contemporary jazz and his fans melting into satisfied aural bliss with every succulent, jazz inflected note. Where do you go from #1?  If you’re veteran saxophonist Richard Elliot, long known as the “James Brown of Contemporary Jazz” for the intense soul inspirations of his recordings, a relentless tour schedule and joyfully exhausting onstage performances, you dig deep into your R&B/jazz roots.  Richard Elliot found his voice on the tenor through the likes of King Curtis, David Sanborn, Tom Scott, Sly Stone and even Tower of Power, whom the sax man toured and recorded with from 1982-87.

Women in Jazz would not be complete without the ladies.

They will open the evening with a mix of standard and sultry contemporary jazz.  Charmin Greene brings taste, class and elegance to her performances.  Taught by the late great saxophonist Richard Thomas and having major influences as Kirk Whalum, and Joshua Redman, her playing connects with her audiences on a deep level.  She has received numerous awards to include the President’s Award by President Bill Clinton.  Pamela Hart is the voice many regard as “Austin’s [Texas] First Lady of Jazz” as expressed by Austin Woman Magazine.   She is a beautiful woman who steals the heart of any Jazz aficionado–no not just Jazz, but music, period.  Her perfectly phrased renditions of classic Jazz standards, contemporary music and compositions composed just for her, win immediate acceptance by any audience as she consistently gives a stunning performance.

The Women in Jazz Concert is sponsored by Austin Cab Company, Austin Private Car, Griomedia, IBM, The Villager Newspaper, Austin American Statesman, Mitchie Mitchell Foundation, Soulciti.com, and HartBeat Productions.  This project is funded and supported in part by the City of Austin through the Cultural Arts Division.

Women in Jazz Board of Directors

This project was funded and supported in part by the

City of Austin through the Cultural Arts Division.

Past Women in Jazz Concert Series

While the Project Managers are planning the 3rd Quarter shows of 2011, go back in time to enjoy the magical moments you experienced (or missed) from previous years at Women in Jazz Concert performances.

What a wonderful concept, Women in Jazz, since 1994. 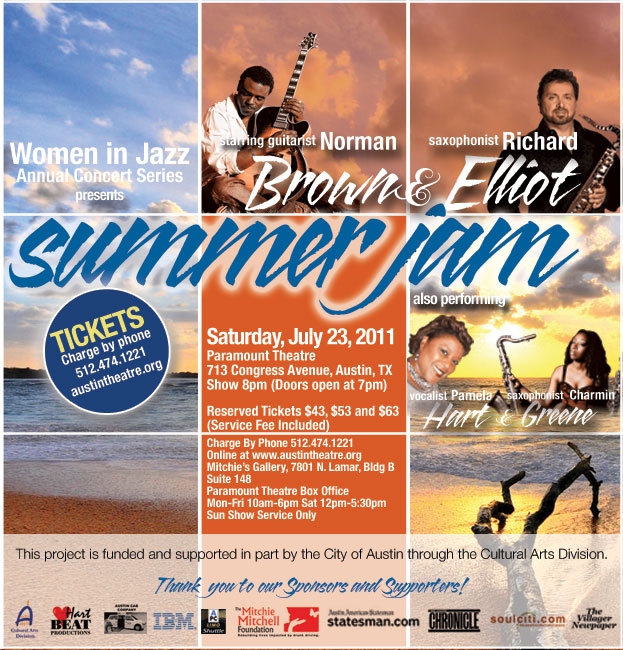