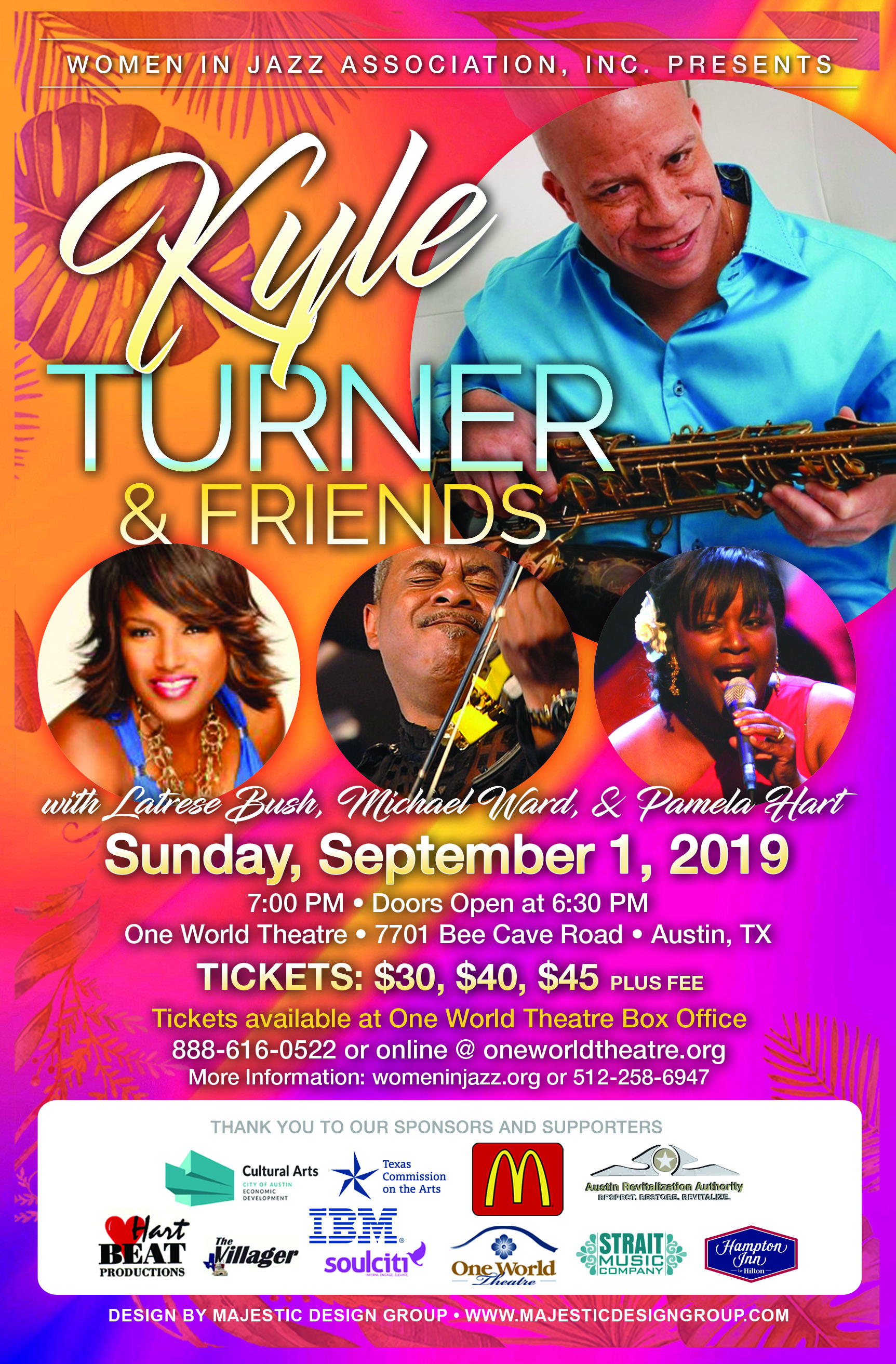 This combination of saxophone from Kyle Turner, Michael Ward on the violin, the soulful voice of Latrese Bush and jazzy vocals of Pamela Hart is the perfect mix for a dynamic evening of traditional jazz, smooth jazz, blues and a little old school R&B. The Kyle Turner and Friends concert is back by popular demand. Get ready to shout for more!

Kyle Turner is a creative and innovative artist that has warmed the hearts of many with the sultry musical notes birthed from his instrument, the saxophone! Kyle’s musical career has provided him the opportunity to share the stage with such artist as Luther Vandross, Johnny Taylor, Bobby Lyle, Joe Sample, Kirk Whalum, Regina Belle, Al Jarreau, and Michael Henderson just to name a few. He has been extremely active as a music educator and lecturer in the Houston Independent School District and as an artist in Residence at Texas Southern University. As a result of his success in music performance and music education, Kyle was honored in the 2008 and 2010 editions of ‘Who’s Who in Black Houston’. His new CD ‘Kyle Turner Live,’ is now available and be available at the show!

Michael Ward is one of the few instrumental musicians who have chosen to play jazz on violin. He has performed with some of the world’s top entertainers throughout his career including Wynton Marsalis, Lionel Hampton, Ronnie Laws, Al Hirt, Najee and Kirk Whalum to name a few. He has been documented on more than fifty different recordings covering several styles from Jazz to Blues, Country and Zydeco, Cajun, Pop and Hip Hop. All three releases, ‘Just Me,’ ‘Laid Back’ and ‘Make a Wish’ were featured in Downbeat and Jazz Times magazines. Michael Ward has five CDs to his credit and over 100 recordings with various artists ranging in diverse styles of music. His smooth deliverance and stage presence will knock you off your feet awaiting another breathtaking performance.

Pamela Hart was born in Los Angeles, California, and moved to Austin, Texas in 1982. Highly regarded as Austin, Texas’ finest jazz vocalist and noted by Austin Women’s Magazine as ‘Austin’s First Lady of Jazz,’ audiences rave about Pamela’s excellent pitch, clarity and soothing vocal quality. Her sultry rendition of classic jazz standards and contemporary music wins immediate acceptance by any audience. She gracefully dances on stage with the music, her radiant voice, and showcases her effervescence and vocal range. While off stage, Pamela has been active in music for 20+ years and willingly contributes to the community, expressing her graciousness and giving ways as well as her artistic endeavors. She has significant performance credits by notable artists and shared the stage with Miss Nancy Wilson, Dianne Reeves, Patrice Rushen, Kirk Whalum, Rachelle Ferrell Norman Brown, Richard Elliot, and many others. Pamela is a beautiful woman who steals the heart of any music aficionado. Be prepared to shout ‘encore!’’