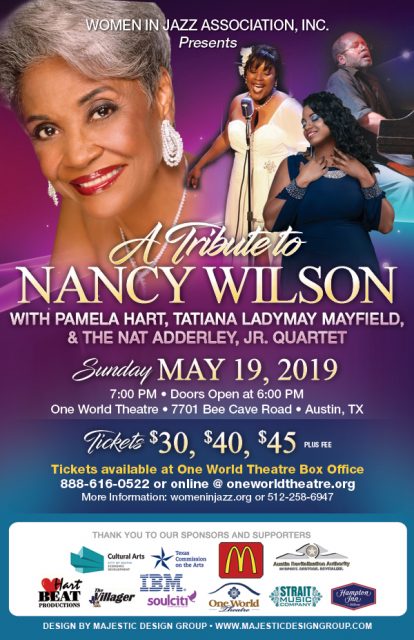 A Little about Nancy Sue Wilson (February 20, 1937 – December 13, 2018): Miss Nancy Wilson was an American singer whose career spanned over five decades, from the mid–1950s until her retirement in the early–2010s. The Women in Jazz Association, Inc. is proud to have presented Miss Nancy Wilson in 2000.  She was notable for her single “(You Don’t Know) How Glad I Am” and her version of the standard “Guess Who I Saw Today“. Wilson recorded more than 70 albums and won three Grammy Awards for her work. During her performing career Wilson was labeled a singer of blues, jazz, R&B, pop, and soul, a “consummate actress”, and “the complete entertainer”. The title she preferred, however, was “song stylist”.[1] She received many nicknames including “Sweet Nancy”, “The Baby”, “Fancy Miss Nancy” and “The Girl With the Honey-Coated Voice”.   In 1962, Cannonball Adderley and Nancy Wilson collaborated on the album Nancy Wilson and Cannonball Adderley, which propelled her to national prominence with the hit R&B song, “Save Your Love For Me“, and Wilson would later appear on Adderley’s live album In Person (1968). Between March 1964 and June 1965, four of Wilson’s albums hit the Top 10 on Billboard‘s Top LPs chart. Among her many honors, Wilson was the recipient of the National Endowment for the Arts (NEA), NEA Jazz Masters Fellowships award in 2004, the highest honors that the United States government bestows upon jazz musicians.  TIME said of her, “She is, all at once, both cool and sweet, both singer and storyteller.”

Pamela Hart was born in Los Angeles, California, and moved to Austin, Texas in 1982. Highly regarded as Austin, Texas’ finest jazz vocalist and noted by Austin Women’s Magazine as ‘Austin’s First Lady of Jazz,’ audiences rave about Pamela’s excellent pitch, clarity and soothing vocal quality. Her sultry rendition of classic jazz standards and contemporary music wins immediate acceptance by any audience. She gracefully dances on stage with the music, her radiant voice, and showcases her effervescence and vocal range. While off stage, Pamela has been active in music for 20+ years and willingly contributes to the community, expressing her graciousness and giving ways as well as her artistic endeavors. She has significant performance credits by notable artists and shared the stage with Miss Nancy Wilson, Dianne Reeves, Patrice Rushen, Kirk Whalum, Rachelle Ferrell Norman Brown, Richard Elliot, and many others. Pamela is a beautiful woman who steals the heart of any music aficionado. Be prepared to shout ‘encore!’

Nat Adderley Jr. is best known for his work with Luther Vandross. Nat wrote (and arranged) Luther’s first top 20 pop hit, ‘Stop to Love,’ and some other important Luther songs, including ‘Wait for Love’ and the Grammy-nominated ‘Give me the Reason’. Nat also arranged many of Luther’s most popular records, including ‘Superstar,’ ‘Here and Now,’ ‘If Only for One Night,’ ‘Creepin,’ ‘If This World Were Mine,’ ‘So Amazing,’ ‘There’s Nothing Better Than Love,’ ‘Never Too Much,’ and ‘Love Won’t Let Me Wait’. Additionally, Nat produced tracks on the last seven Vandross studio albums. These include ‘My Favorite Things,’ ‘Have Yourself a Merry Little Christmas,’ ‘Going Out of My Head,’ ‘Knocks Me Off My Fee,’ and ‘The Closer I Get To You,’ a duet with Beyoncé Knowles. Nat was Luther’s musical director from 1981 until his death. Many other artists have had major successes with help from Nat Adderley, Jr. Nat wrote ‘The Wave’ for Kirk Whalum, arranged Natalie Cole’s 1987 hit recording of ‘When I Fall In Love,’ produced ‘Just Another Lonely Night’ for Johnny Gill, arranged most of Aretha Franklin’s album Jump To It, produced Gloria Lynne’s album No Detour Ahead, and did the string arrangement for Doc Powell’s Grammy-nominated version of ‘What’s Going On.’ Also, Nat produced tracks for the Temptations’ CD ‘Awesome’ (2001), and Ruben Studdard’s ‘Love Is’ (2009).

Contributions from private donors. Thank you for helping Women in Jazz make this happen!

A Tribute to Miss Nancy Wilson