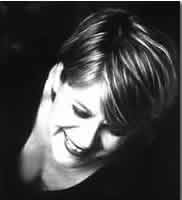 “Powerful”, “imaginative”, “unique”, “emotionally uplifting” are some of the adjectives critics use to describe the talents of jazz singer Kellye Gray (deceased). Most importantly, Kellye is that breed of jazz singer who has developed a sound that is truly their own. This same kind of recognition is given to such names as Ella, Sarah, Cassandra and Betty. Her style is post-modernist and she uses her voice like an instrument within the ensemble. She possesses what critics like to call – “musicianly chops.”

Gray, a native Texan, began her career in the most unlikely of places. She cut her teeth up and down Austin’s own Sixth Street during the 1980’s where the music was more rock and roll and cover music than be-bop. On a Kellye Gray gig back then it was not unusual to hear Charlie Parker, Miles Davis, a Modonna or Prince cover all in the same set. But, creative choices and great taste allowed “the KGB (the Kellye Gray Band)” to attract not only a college crowd but also a more sophisticated crowd of up-and-coming baby-boomers.The group quickly became a frequent headliner at many of Austin’s festivals, like Aqua Fest and Old Pecan Street Festival. Kellye was recognized as one of the Austin Chronicle’s favorite singers and jazz groups. She became a regular stand-in for “home-boy-soon-to-be-star” Kirk Whalum as his career began to blossom outside of Texas. It was her friendship with Kirk that would bring her up on stage in Houston one fated night in 1987 for a jam session would change her life forever and bring Kellye the wider recognition she deserved.

Kellye moved to Houston in 1987 performing nightly at the Blue Moon. There she developed a following so strong it attracted the fledgling Justice Records to her door. She recorded Standards In Gray (Justice Records) in 1989 and the disc soared to the top of the Gavin report and other jazz charts. This would put Kellye and Justice Records on the map. While on promotional tours for Standards, Kellye fell in love with San Francisco and made her move there in 1992. She was named a member of the Texas Jazz Heritage Society, a group founded by the late Arnett Cobb. Two years later she recorded Tomato Kiss(Proteus Recordings) with most of the original Texas crew from the first disc. The magic of the that group proved to be a good choice and again she had great success as the CD rose to the top of the charts. While in San Francisco she recorded A Piano For All Seasons (Clarity Recordings) with pianist Kevin Gibbs and Funnjazz (Man On The Street) with the acclaimed “Big Money in Jazz” Band. While Developing her chops as a Dixieland/Traditional band-singer she maintained her instrument-like approach with her voice and would use her scat singing and instrument mimicking techniques within the traditional ensemble. The “Big Money” band soon became known as “the Grateful Dead of the traditional jazz set”. In 1998 a track from her Tomato Kiss CD, “A Small Day Tomorrow”, was included in a compilation out of New York City entitled, Fruit Cocktail (Streeter Music).

She moved to Los Angeles in 1999 where she began working with famed jazz pianist Shelly Berg. They have a CD project in production. Family brought Kellye back home to Austin where she relocated in Central Texas in the spring of 2001. In February 2002 she recorded, blue and pink a live concert (Proteus Recordings), recorded in Houston at Ovations Nitespot. The CD was slated for release in June of 2002.

celebrates the music of Prince with

(AUSTIN, TEXAS – February 1, 2022, Source: Daydream Believer Creative) – Kellye Gray wasn’t planning on making a valedictory statement. In 2018, when she was recording Purple Gray: A Prince Offering, the powerhouse jazz vocalist had no idea that cancer was already stalking her. Diagnosed in early December of that year, Gray died just weeks later on December 29. For a while it seemed that her last recording was destined to be lost.

Slated for digital release on Feb. 22, 2022 (which would have been Gray’s 68th birthday), Purple Gray isn’t the work of an artist summing up her brilliant career or coming to terms with mortality. It’s an album exploding with life, a surging, unstoppable celebration that joins Prince on his home turf while bringing some serious jazz chops to the party. Featuring a top-shelf cast of Austin musicians, the eight tracks hit a sweet spot encompassing funk and R&B grooves as Gray puts her own glorious stamp on some of Prince’s iconic songs.

Gray had recently relocated to Paris when she started developing the Purple Gray project with a cadre of Austin players led by bassist/arranger Chris Maresh, a close friend and musical collaborator since the mid-1980s. They had marinated in Prince’s music as young performers working on the Texas music scene, and he wasn’t surprised when she approached him with the idea.

“Kellye was a force of nature,” Maresh says. “When I first started playing with her in Austin in the 1980s she was singing Aretha Franklin and James Brown and killing it. She could deliver a really powerful performance, and was also a fantastic scat soloist, which is truly a rare thing. She wasn’t formally trained musically, but she knew how to grab a moment.”

Purple Gray kicks off with “All The Critics Love U In New York,” a sardonic blast of jazz/funk that features Russell Haight’s torrid tenor saxophone weaving and slashing across Gray’s alternating proto-rap and vocal wail. The song builds to a concise, high-velocity scat solo propelled by the relentless groove generated by Maresh and drummer Kyle Thompson (whose muscular but supple support is a key to the album’s success).

In a tonal pirouette as deft as one of Prince’s amplifier leaps, Gray follows the mocking irony of “Critics” with the abject balladic devotion of “I Would Die For You,” from Purple Rain, which features a playful improvised outro pairing Gray’s wordless vocal line with Eddie Hobitzal’s skittery piano.

Any journey into Prince’s domain requires wrestling with eros, and Gray’s sassy take on “Kiss,” a sensuous tease from 1986’s Parade (the soundtrack for his film Under the Cherry Moon), captures the essence of his puckish sense of humor. “Act your age, not your shoe size,” she croons, delivering a Prince line worthy of Mose Allison. In another artful zig zag, she follows the come on with another aching ballad, “Gotta Broken Heart Again,” from 1980’s Dirty Mind. Taken at a late-night slow-dance tempo, it’s a romantic’s rueful cri du coeur set to a sinuous melody.

Prince originally rendered the gospel-powered lament “How Come U Don’t Call Me Any More,” the B-side on the hit single “1999,” in his soaring falsetto. Gray takes the tune down a register, delivering a gutsy performance that rises and falls on Hobitzal’s supple organ work. A juicy backbeat and a greasy saxophone introduce Anotherloverholenyoheadfrom Parade, and it’s a piece that exemplifies the power of interpreting Prince’s music in a mostly acoustic setting.

The album closes with two riveting performances. With some subtle melodic embellishments, harmonic tweaks and utter emotional commitment Gray redefines “Nothing Compares 2 U,” the 1990 hit that turned Sinead O’Connor into a star. The closer is another torch song, “The Beautiful Ones” from Purple Rain. Shadowed by Haight’s tenor saxophone, which mirrors and heightens her torment, its a slow burning conflagration that builds to the climatic question: “Do you want him or do want me?” Prince’s music has never sounded so raw and labile.

Part of what makes Gray Purple such a potent project is that Prince’s music is so well constructed. Stripped of his brilliant arrangements, the songs take on new life rebuilt along the lines of an interactive jazz combo. The loose and conversational interplay between the musicians and Gray lets the music expand and breathe in a way that feels utterly natural. These tunes are hardly just covers. They’re vividly reimagined.

“We came from that era when all these funk bands were huge, and we both loved Prince,” Maresh says. Since the recordings were made in two sessions when Gray traveled back to Texas from Paris “there was no time to rehearse or see if it was going to work. We got the right guys for the job and we made the arrangements as clear as possible. It wasn’t just a lead sheet with chords. We tried to create a mood and an arc for each composition.”

Gray’s last recordings are being released due to the efforts of Lucy Anderson, the singer’s former partner and longtime friend. Bereft in the years following Gray’s death, she eventually gathered herself, determined to fulfill Gray’s final creative ambition. “When I finally came through the darkness, I realized oh, my God we’ve got to get that Prince tribute out into the world,” Anderson says. “It was her wish. Even from her hospital bed in San Francisco, she had a vision for the cover art.”

Anderson worked closely with Maresh and audio engineer Erich Avinger, who mixed the tracks, to bring the album to fruition. Like Maresh, Avinger was a close associate of Gray’s and boundless admirer of her artistry who provided invaluable assistance on a project that faced some skepticism from her longtime jazz fans.  “To me, it was a journey back to her roots, bringing with her all the sensibilities acquired in a life of jazz,” Avinger says, noting that whatever material she interpreted “she blew the roof off and she didn’t stop there. She kept taking you higher and higher.”

A self-described “military brat” born in Dallas and raised mostly around air force bases in Texas, Gray loved to sing and studied guitar as a teenager. Possessing a keen ear and resourceful mind she started figuring out chords to play along with jazz vocal albums in her parents’ collection. Music was a passion through her teenage years, but as a young adult in the early 1980s she started establishing herself as a performer in Austin as part of the city’s thriving stand-up scene, joining a comedy troupe that included Bill Hicks and Sam Kinison. After doing several one-woman shows she ended up sitting in to sing with a friend, guitarist Scott Cain, who encouraged her to take singing seriously.

Her last release during her life, 2017’s critically hailed Rendering (Grr8 Records), seemed to serve as a career capstone. She used the two-disc album to reissue her first recording, Standards in Gray, alongside a gorgeous new set of songs. The contrast between the bright, eager and self-possessed young Gray and the emotionally incisive, slay-you-with-a-ballad veteran is beyond poignant. It seems more than fitting that she gets the last word with Purple Gray, a project that embodies her wide-spectrum skillset and boundless soul. In celebrating the genius of Prince, Kellye Gray makes a compelling case for jazz artists interpreting his songs, while inviting Prince fans to hear his music anew.