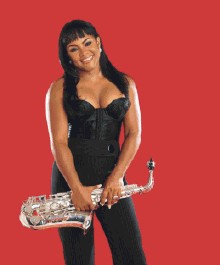 If you haven’t heard of Pamela Williams, listen up –This multifaceted beauty is one to watch! Since her successful, ground-breaking debut album Saxtress, Pamela Williams has toured the country, stunning her audiences with electrifying performances. She has shared the stage with some of the best in the business. Prior to her first album, Pamela had been highly visible as a featured saxophonist with Patti Labelle and Teena Marie. She has made candid television appearances with artists such as Babyface , Sheila E, and was featured as a guest artist on the Arsenio Hall show. A stunning, multi-talented artist (saxophonist, writer, producer, singer, and painter), Williams captivates listeners with a harmonious soulful sound. Williams creates tracks of irresistible grooves, funky dance tracks, and sensual R&B flavored ballads. Pamela collaborates with other hit-making producers Kim Waters and David Mann to create urban-flavored smooth-jazz classics.

Hailing from Philadelphia, Williams is heavily influenced by the city’s deep musical tradition. She reflects, “I was exposed to wonderful jazz and R&B growing up in Philadelphia. I was definitely influenced by fellow Philadelphian, Grover Washington Jr. Actually he was my first teacher. I used to play all of his records and copy what he was doing and that is really how I learned to play the saxophone. I loved his innovative blend of smooth jazz and R&B.” Pamela Williams made her recording debut, Saxtress in 1996 which found a home on the Billboard charts for five consecutive months. The cd also earned her a nomination for the Soul Train Lady of Soul Awards. It also earned her the title of Best Female Contemporary Jazz Artist of 1996. Her follow up recordings include Eight Days of Ecstasy , Evolution, The Perfect Love, Sweet Saxations, and her latest release on Shanachie Records, Elixir. With each of Williams’ cds, her singles have always been among the top 20 best on the charts.

Pamela has always exhibited many diverse musical elements in her repertoire from jazz to funk, R&B, house Latin, and pop. She is an incredible producer and arranger who produces other artists as well. There is another creative side to Pamela Williams. She is not only an accomplished musician, she is also a very accomplished visual artist, working in every medium from pencil to watercolor to oil. Her work ranges from realism to abstract art and she has been commissioned to do several paintings. One wonders which came first and when has she found the time to pursue such time -consuming and demanding careers. “I have been a visual artist much longer than I’ve been a musician. When I was a child my first love was art but I also had a passion for music as well . My first big break in the music industry came when I was in college earning a degree in art and I landed a gig with Patti LaBelle. I was at a crossroads, but I found a way to make them both work.” In a field dominated by by men, Pamela Williams’ name appears alongside chart-topping players like Dave Koz, Kenny G, Najee, and Boney James. She has no doubt found her own voice and proven that she can hang with the best of the boys.

Pamela has recently released a new cd in June of 2007 entitled “The Look of Love”. This is Pamela’s seventh CD. This project is a collection of covers of the magical music of Burt Bacharach, Dionne Warwick, & Hal David. Pamela has proven again to be one of the most creative arrangers and producers around. She puts a new twist on ten classical Burt Bacharach compositions to make them her own with a modern, funky, and sensual style. It has been said that artists often get better with time like a fine wine and Pamela Williams’ new release is musically intoxicating and tastefully done. There is much more to come from the sexy Saxtress!