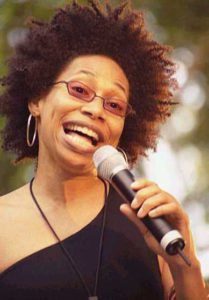 International recording artist, Rachelle Ferrell, was featured on September 10, 2005 in  the Women in Jazz Concert at the Paramount Theatre on 713 Congress Avenue in downtown Austin, Texas.

Rachelle had arrived on the contemporary jazz scene, but her visibility on the pop/urban contemporary scene has boosted her audience’s interest in her jazz recordings. She got started singing in the second grade at age six. This no doubt contributed to the eventual development of her startling six-and-change octave range.